Ants are one of the most common pests encountered by most homeowners and renters, leaving most to wonder how to get rid of ants. These creatures are found both indoors and outside and will always survive where there is food and water sources. Treatments of Ants include proper sanitation in addition to an actual pesticide treatment using a combination of professional grade outdoor and indoor ant sprays and ant baits.

There are many different species of ants, including fire ants, sugar ants, carpenter ants and tiny black ants which makes general treatment difficult. Not every ant control product is labeled to treat all ant species, so it is important to identify which ants you are trying to treat before you apply any form of treatments. 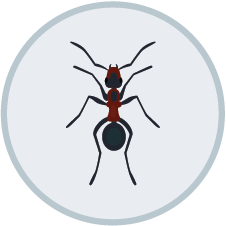 Ants are a social insect that lives in colonies. Ant control treatment plans should include killing the entire colony. Just spraying an ant with a typical ant spray, particularly a repellent spray, will only kill a few at best and scatter the colony.

Carpenter Ants: Carpenter ants inflict the most damage by making their nests in woods. Their nests can be found in house walls or roofs, fences or decks, or trees, but they will even construct hills in the ground. Large black ants are the most common kind. There are numerous types of carpenter ants, but if the consumer is reporting huge, black ants, it is most likely carpenter ants. A common sign of carpenter ant infestation is sawdust from the ants excavating their nests.  Carpenter ants do not eat the wood, they only build in it. Another common sign of infestation is the sudden appearance of many winged ants.  Any kind of ant can develop wings.  The winged ants are scouts looking for a new nesting site.  They appear when a nest has reached a certain size and level of maturity that it needs to expand and develop secondary nests.  Often the customer will not have noticed any ants before the appearance of the winged ants.

Moisture Ants: These ants infest buildings as well. They prefer damper environments such as basements or regions that have seen floods or water damage, although they may also be found in dry locations. Moisture ants are significantly smaller than carpenter ants and hence do not cause as much harm, although they will behave similarly.  They will make nests in walls of buildings, but rather than seeing signs of sawdust, the customer may see what seems to be sand, which is particles of wood or dirt that are very small because of the size of the moisture ants that were doing the excavating.  Again, moisture ants may first be noticeable when they produce large, winged scouts.  The treatment is the same for moisture ants as for carpenter ants.

Lawn or Pavement Ants: Ants might infest buildings if there was an ant infestation in the surrounding lawn, flowerbed, or garden areas. The ant population grows to the point that it infiltrates the house.  Exterminators treat them with spraying, and anthills can be treated by dusting the hill with insecticide dust.  If the customer wants anthills dusted, they should flag them somehow if they are not going to be home so that the technician doesn’t miss any.  It can be challenging to find anthills, especially after rain or after mowing the lawn.  Less common are pharaoh ants, which are incredibly tiny and infested buildings.  We use bait for pharaoh ants instead of spray because they are susceptible to chemicals. They will sense a spray application in the vicinity and scatter, spreading the infestation.

Pharaoh’s Ants: These are tiny, bright yellow to red, with black patterns on the abdomen. Pharaoh ant colonies can have up to 300,000 members and many queens — exceptionally huge colonies with millions of workers and thousands of queens. Colonies are widespread, and this activity frequently foils eradication attempts.  Pharaoh ants forage long distances and establish scent trails. Workers tend to trail along edges of door moldings and baseboards and use electrical and telephone wires to gain assess into rooms and between floors. Pharaoh ants typically establish themselves in areas near moisture, such as the kitchen or bathroom. They travel from room to room within the walls via plumbing pipes and electrical wires. They feed on various foods, including baked goods, soft drinks, greases, meats, sweets, fruits, and scavenge on dead insects. Pharaoh ants are usually much more challenging to manage than other ant species due to their dispersing ability.

While there are a variety of do-it-yourself ant control treatments in the market, efficient control involves using a professional pest control service like CEOS to manage the infestation and prevent a recurrence. Our service professionals understand and can give discreet and targeted ant controls over the many varieties of ants. We are the most trusted pest control company for ants control.